Giants vs. Dodgers: The Coast-to-Coast History of the Rivalry Heard ?Round the World (English Edition) por Joe Konte 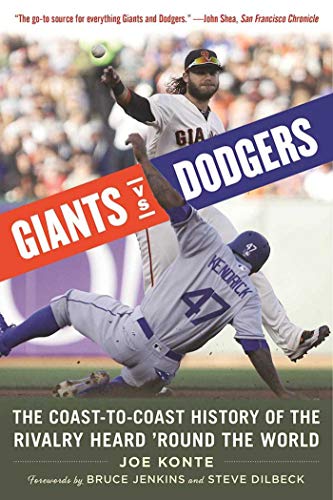 Joe Konte con Giants vs. Dodgers: The Coast-to-Coast History of the Rivalry Heard ?Round the World (English Edition)

Games between the Dodgers and Giants are never just another day at the ballpark. Dating back to the late nineteenth centurywhen the teams embodied the competitive spirit of rival metropolises of New York and Brooklynthe Giants-Dodgers rivalry gained intensity throughout the early twentieth century. The cheering and jeering continued unabated until 1957, when the clubs backed the moving vans up to the Polo Grounds and Ebbets Field, and took their rivalry to new venues in Los Angeles and San Francisco.

Indeed, Brooklyn-New York baseball was a tough act to follow, but the West Coast version didn’t take long to fire up the emotions. Only six games into the first West Coast season, the clubs had their first beanball dustup. The venue had changed but the venom remained, and the rivalry became author Joe Konte’s obsession. Fifty-eight years ago, he attended one of the first Giants-Dodgers games ever played outside of New York. A longtime newspaper editor and baseball fiend, Konte understands what is so special about this storied rivalry. And sovia statistical analysis, game summaries, roster scrutiny, manager matchups, season recaps, and morehe has put together a rivalry bible. Revised and updated to include the events of the last three seasonsfrom the Giants’ 2014 World Series win and the Dodgers’ playoff runsGiants vs. Dodgers captures the spirit and intensity of one of the greatest rivalries in American sports.