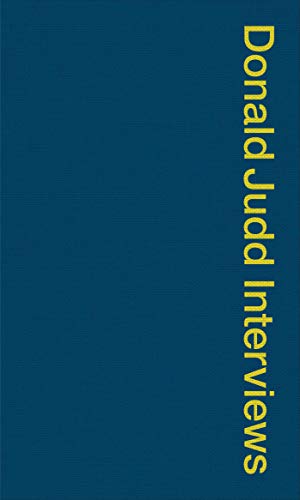 Reseña del editor Donald Judd Interviews presents more than sixty interviews with the artist over the course of four decades, and is the first compilation of its kind. It is the companion volume to the critically acclaimed and bestselling Donald Judd Writings.This collection of interviews engages a diverse range of topics, from philosophy and politics to Judd’s insightful critiques of his own work and the work of others such as Mark di Suvero, Edward Hopper, Yayoi Kusama, Barnett Newman, and Jackson Pollock. The opening discussion of the volume between Judd, Dan Flavin, and Frank Stella provides the foundation for many of the succeeding conversations, focusing on the nature and material conditions of the new art developing in the 1960s. The publication also gathers a substantial body of unpublished material across a range of mediums including extensive interviews with art historians Lucy R. Lippard and Barbara Rose.Judd’s contributions in interviews, panels, and extemporaneous conversations are marked by his forthright manner and rigorous thinking, whether in dialogue with art critics, art historians, or his contemporaries. In one of the last interviews, he was asked, “What kind of advice do you have for young artists and architects based on all the things you thought all these years?” Judd responded, “To remember that art and architecture are both real activities with their own integrity and that they are not basically commercial activities and you have to partly live with that. Certainly, it’s not hard to maintain the difference ... I think both activities, to repeat myself, have an integrity. They are each a particular activity, and if you don’t like that activity, don’t do it. Go do something else. If you really want to make a lot of money, go sell cars or something.”Donald Judd Interviews is co-published by Judd Foundation and David Zwirner Books. The interviews expand upon the artist’s thinking present in Donald Judd Writings (Judd Foundation/David Zwirner Books, 2016). Biografía del autor With the intention of creating straightforward work that could assume a direct material and physical ""presence"" without recourse to grand philosophical statements, Donald Judd (1928-1994) eschewed the classical ideals of representational sculpture to create a rigorous visual vocabulary that sought clear and definite objects as its primary mode of articulation. Judd's oeuvre has come to define what has been referred to as Minimal art-a label to which the artist strongly objected on the grounds of its generality. Flavin Judd is artistic director of Judd Foundation. He is the husband of psychoanalyst Michele Judd, the father of three children, and the son of Donald Judd, whom he assisted in the making of spaces and the installation of art. For Judd Foundation, he oversees art installations, curatorial matters, and architectural projects, including the restoration of 101 Spring Street in New York and buildings in Marfa, Texas. He is co-editor of Donald Judd Writings. His films, art installations, and architectural designs have been recognized with awards. Caitlin Murray is director of Marfa programs and archivist at Judd Foundation. She is co-editor of Donald Judd Writings and The Present Order: Writings on the Work of Ian Hamilton Finlay(2011). Murray is co-owner of the Marfa Book Company, a bookstore; publisher; film, music, and performance space in Marfa, Texas. She is an advisory member of Yale Union.