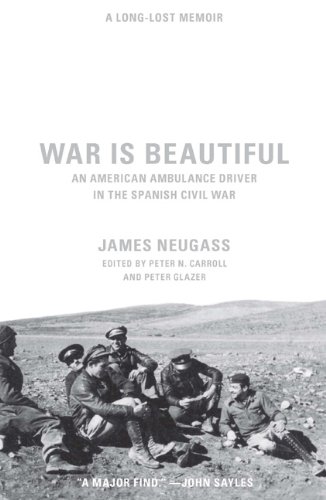 Críticas Elegant prose, brutal description, and a wry sense of humor characterize this journal by a poet and aspiring fiction writer during his months as a Spanish civil war volunteer in the Abraham Lincoln Brigade. Although a part of history largely ignored in favor of World War II, the Spanish civil war was a testing ground for German, Italian, and Russian political and territorial ambitions, as well as a passionate cause for idealists, Communists, and anti-Fascists. Neugass records his observations with prescience and an eye to posterity. After returning from Spain, he sought to have his journal published but failed to do so before his untimely death in 1949. The typescript, only recently found, has been edited and annotated by two board members of the Abraham Lincoln Brigade comrades and add notes that put his remarks in context. Although Neugass served for only about five months in 1937-38, he saw the fall of the Spanish Republic to the better-equipped Fascist forces under General Franco. This valuable addition to Spanish civil war history also wartime emotions-the boredom, excitement, fear, pain, and loss. Published in time for the 70th anniversary of the Great Retreats of the Republican forces, this work is highly recommended for academic libraries and libraries with Spanish civil war collections. [See ""LJ 9/1/08.-Ed.]-Maria C. Bagshaw, Knowledge & Information Resources, Ecolab, Inc., St. Paul, MN Reseña del editor A memoir based on the recently discovered journals of an award-winning poet on the front lines as a member of the Abraham Lincoln brigade in Spain recounts his efforts to counter European fascism, service as an ambulance driver, and efforts to rescue wounded soldiers from the battlefield. 20,000 first printing.